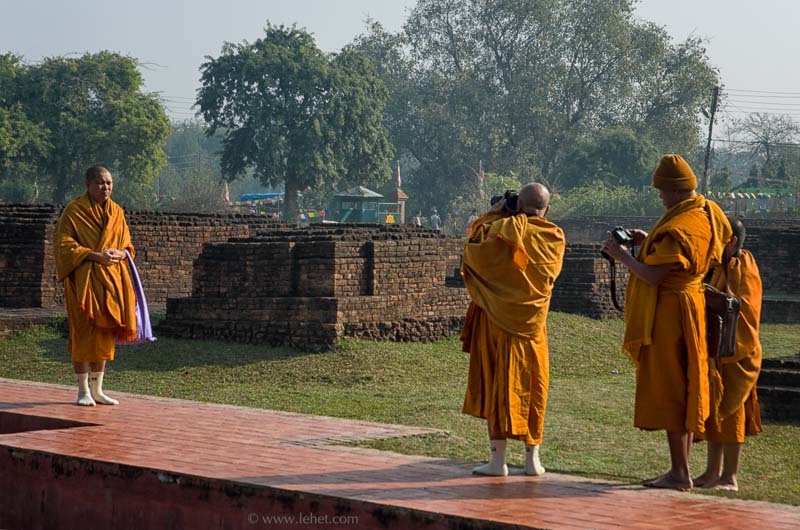 This is an interesting example of how an image can change over time — change from the first impression at the time of exposure, then as it settles in, and then still more as the world changes past the still moment.

My sense while making the exposure was that this was funny. These monks had just been doing some amazing chanting in Pali under the bodhi tree at Lumbini. One of them, the subject of the monks’ photography, was obviously highly venerated, maybe the head of the monastery back home, somewhere in southeast Asia. Burma? So here were these renunciates, monks of the most ancient and pure lineage of Buddhism, who had just been chanting in a 2300 year old language, and they had some expensive, high-end photography gear; they were being tourists like the rest of us. And of course with the saffron color and scene, it made for a good on- the-fly composition. I guess I thought it was funny in the way nuns on a barstool might be funny.

As time passed, out of the context, it seemed less funny to me. Somehow the plain-human quality of the monks started to shine though, and of course plain humans use cameras all the time. Also the composition started to stand up on its own, apart from concept. The origional notion faded into less significance as the photo became its own thing, as they do.

Recently, the world was shaken a little bit, at least the Buddhist world, and this photo changed with it, again. Last Sunday the 1500 year old Mahabodhi temple in Bodgaya, India, was bombed in a terror attack. That is the spot where the Buddha found the enlightened quality of his mind 2500 years ago, and now it’s being bombed with IEDs to randomly harm innocent people.

Just as I, and the monks in these photo, were tourists in Lumbini, Nepal, there were people just like us, the monks and I, at Bodgaya, who could have been hurt in the bombings. A few monks were indeed injured.

One thought on “Four Theravadan Monks Photographing in Lumbini, Nepal”