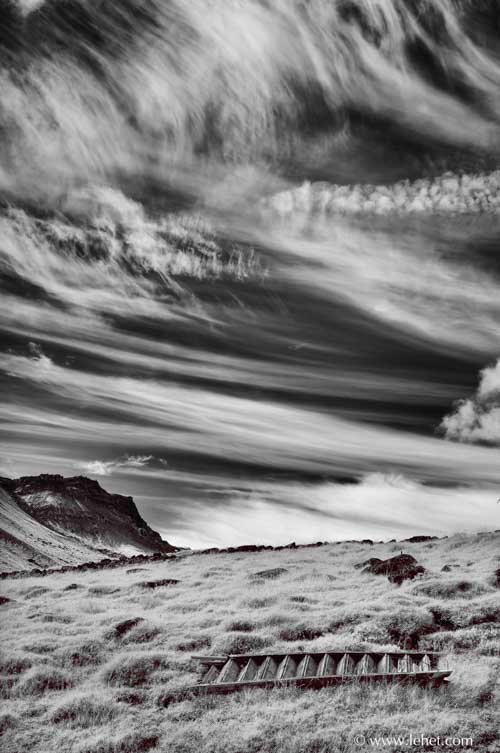 I posted last week’s Icelandic horizontal Ladder image from a beach vacation, which was quite lovely and full of photographs. Instead of posting some of that new work, I’ll continue along this thread of ancient inspiration.

Last week’s ladder came up out of nowhere to be a “finished” work, but this week’s Horizontal Staircase image has been brewing for a long time. I see it a lot, among the images I want to work on, but until now, somehow I’ve never been able to correctly “print” it, even to screen. Interpreting, manifesting the raw image is more than half the battle in photography.

I’ve probably mentioned before in this blog what a valuable experience it was, while studying with John Sexton in 1982, (he was at the time Ansel Adam’s assistant) to see the process of an Ansel Adams print. We had the opportunity to view a series of prints, or really versions of a single print, of Ansel Adams, from straight print through several work prints, to a final print. The work prints detailed the burning, dodging, and chemistry changes, and the impact on the prints was dramatic. The original straight print was really pretty dull, until he figured out how to make it speak, until he ultimately “performed” it. Ansel used to say that the negative is like a composers score, and the print is the performance (and it may be performed differently at different times).

So, with this horizontal staircase, I’ve had some trouble over the last 6 years, since exposing it. I knew I wanted to give it wings, but I just couldn’t get it right. Inspired by last week’s image, I decided that these two are a series, and indeed they were exposed within a few hundred yards of each other. I used some technical direction from last week’s final post, and I think I’ve got this image to where it’s good enough to post. Yay!

In other news on the lehet.com front, I’ve implemented, or done the technical implementation, for retina image displays in the lightbox display from the home page, and eventually for the “detail” pages. But now I have a huge amount of image resizing and image-size-code to put in place. Well, if you have a “retina” device, like a newer iPad, they will look quite splendid.