I should be back tomorrow with a new image and some writing, but I’ll be heading out to FedEx soon to send off these prints to Washington DC to hang in Bernie Sanders’ office. I am a Vermont resident, and in fact have lived in Vermont more than anywhere else in my life, by far. (For the other part of my adult life, I’ve crossed the Connecticut River into New Hampshire for some stretches). So the news is that an intern from Bernie’s office contacted me requesting the loan of some images to hang in the DC office. I gave them various options, and in the end they picked these four, which of course are all Vermont images. They’ll be there for a year, and I’m pleased about it.

One thing that is interesting is that out of all of the range of papers I print on, these are all images I print on Epson Hot Press Natural paper, a creamy and velvety matte paper with a warm tone. I like this paper for infrared photos, because it tends to look more natural, and I sometimes like it for snow scenes because it gives a smoother rendering of images with a lot of high key or white in them. Two of the images are infrared, and the other two “normal” capture, one on black and white sheet film.

Three Trees, South Strafford
This is an early exposure of mine, exposed to 4 x 5 film. I was a skinny young adult just out of college, schlepping a big view camera around. In my darkroom days I used to print it on a warm tone portrait paper, Agfa Portriga I think it was called, and then tone it hard with selenium. So I print it the same way now. 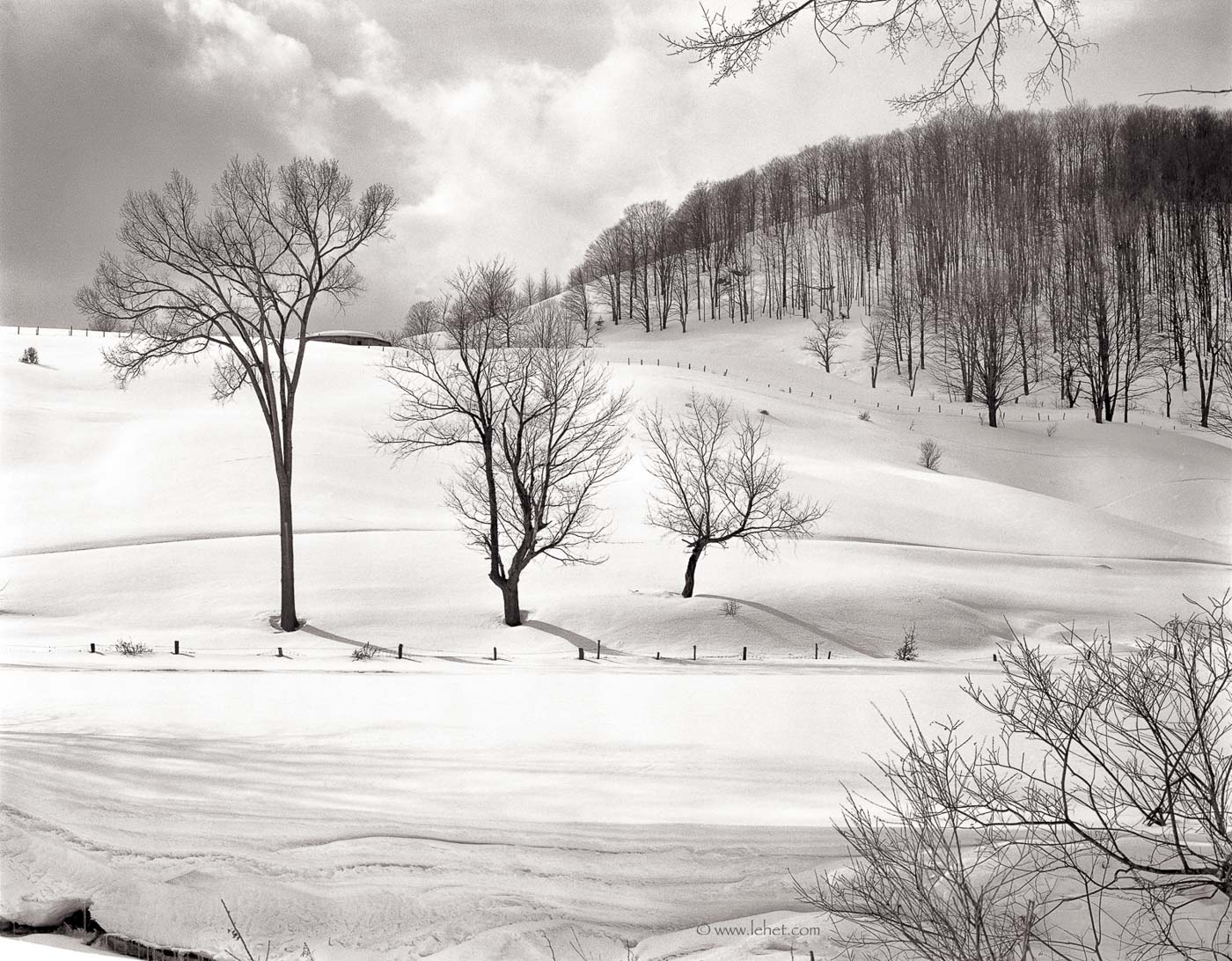 Haying in Progress, Barn, South Woodstock, Vermont
This was a day when I had a lot of time in this location, in South Woodstock, Vermont. A pleasant summer day, and I had time to pass. They did a lot of work on that hay field while I was there, and the clouds of course changed quickly and constantly. I made a lot of exposures with a normal camera and also the infrared camera. This one, from the infrared, is the one I’ve picked of them all as the best. 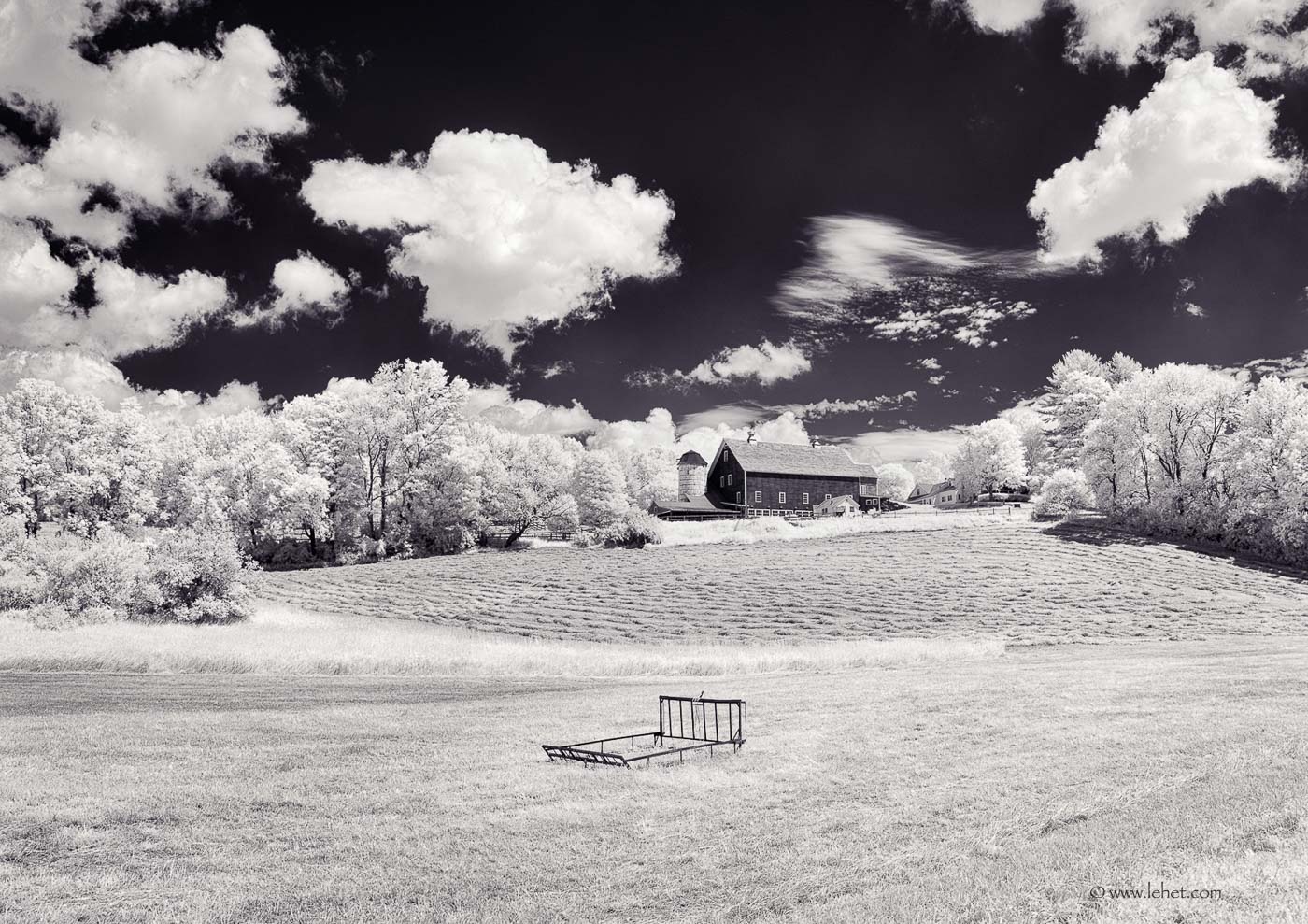 Field of Dandelions and Barn
This is a conventional capture, printed as black and white. I’m very lucky to have this particular hayfield a short walk from my house. Most years, the dandelions go crazy. It’s a rare year though when there is a good bloom and seed-set like this, and also an opportunity to photograph the full display before the wind, a thunderstorm, or the hay-cutters take them down. I haven’t managed to photograph quite such a display in more recent years, when some changes in camera and lens choices would make it interesting to experiment. As it is, I’m not sure I could beat this one if given another chance: 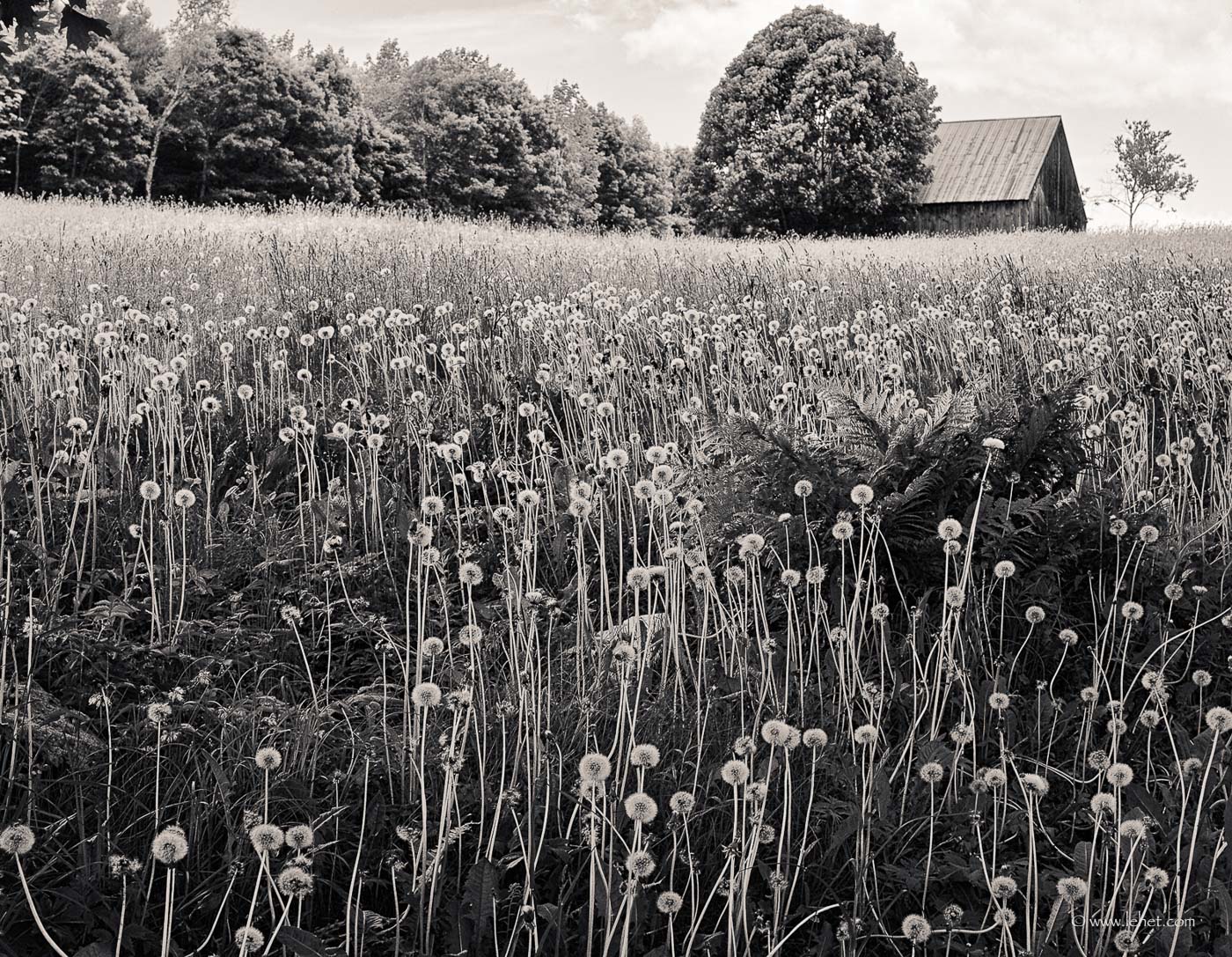 Spring Cornfield, Hay Field, Clouds, Hartland Vermont
This is also near my house, but in another direction. Within a half mile of this, I’ve probably made well over a thousand exposures in all seasons. It’s quite a spot. This is my only really famous image though, and doubly famous now. The first brush of fame is that the Boston Athenaeum bought this print, and then chose to display it (I had three prints hanging in the show, out of the dozen or whatever that they bought) — displayed it in a show of “recent acquisitions” last summer. It was a really great show, and I was honored to be hanging in it. It’s an infrared exposure, but it looks quite natural, I think.

5 thoughts on “Prints Heading Out to Bernie Sanders’ Office”